You are here: Home / Core concepts / What is whole exome sequencing?

Following the recent NHS announcement that WES will be used for critically ill babies and children, we explore what it is and the benefits it could bring

NHS England recently announced that it is offering a “a new form of DNA test capable of rapidly diagnosing rare diseases for critically ill babies and children”.

The test is rapid whole exome sequencing, and it offers great hope: “This quick and accurate new test means rapid diagnosis and reassurance for families when they need it most, and gives babies and children the best chance of a healthy and happy life,” said NHS England chief executive Simon Stevens.

So what is whole exome sequencing and what does it have to do with genomics?

What is an exome?

The parts of our DNA that code for proteins are known as ‘exons’. These make up around 2% of the human genome and are collectively known as the exome.

The exome is the best studied and most well understood part of the genome, and is where the vast majority of known disease-casing variants are found.

Thus, sequencing the whole exome makes it possible to screen for a wide variety of disease-associated variants in a single test.

Because the exome represents only a fraction of the DNA in the whole genome, it can be sequenced more easily and interpreted more quickly, meaning potentially faster results for patients. As the majority of known disease-causing variants are found within the exome, rapid exome sequencing has the benefit of being able to deliver results quickly that are relatively likely to impact on treatment and management decisions.

The test has been used for 80 babies and children since it was introduced in the NHS in October 2019, and more than half of these children received a diagnostic result. Around 700 young patients are expected to benefit from the new test each year.

Though we know less about the areas of the genome that are not responsible for coding for proteins (see our articles about ’junk’ DNA and unlocking the secrets of the genome), there are disease-causing variants outside the exome. These can include anything from small changes in DNA regions that regulate gene activity to larger-scale changes known as ‘structural variations’, or alterations that change the folding structure of chromosomes.

As researchers learn more about the non-exome regions of the genome, evidence of disease-associated variants is coming to light. Whole genome sequencing ­- where all the patient’s DNA is read and screened – may be a better option for some patients with suspected rare diseases than exome sequencing.

The NHS has committed to offering whole genome sequencing to children with cancer and rare genetic disorders as part of the 2019 Long Term Plan, which aims to incorporate genomics and personalised medicine across the NHS, including sequencing half-a-million genomes by 2024.

Sepsis and the genome 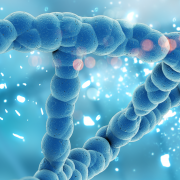 Genomics in the NHS