You are here: Home / Expert view / Genomics and intellectual disability

The worldwide incidence of all forms of intellectual disability (ID) has been estimated at 1‑3%, and patients with ID are amongst those most commonly referred to clinical genetics. Clinically the diagnosis is broad, ranging from mild to severe symptoms in isolation or associated with other clinical findings. However, the majority of cases have gone without any specific diagnosis; it has only been in the last five or six years that the power of genomics has shown significant impact, with the identification of new genes and improved diagnostic yields. Why has it taken so long to get to this stage? Fiona Macdonald explores.

The condition suffers not only from clinical heterogeneity (variability) but also extreme genetic heterogeneity. Over 700 genes have already been identified as causing ID, which means that simple testing strategies are usually insufficient to confirm a genetic diagnosis.

Traditionally, testing for ID was based on detection of chromosomal abnormalities using a technique called G-banded karyotyping. Karyotyping of patients with ID, excluding cases of Down syndrome, typically has a detection rate of just 3% and technological improvements (fluorescence in situ hybridisation or FISH) only raised it by a further 2-3%.

Although molecular analysis of a few specific single gene disorders complemented karyotyping, it depended on an astute clinician to identify the most likely conditions for a given clinical presentation. For example, fragile X mental retardation affects 1 in 5000 males. Once the causative gene, FMR1, was identified in 1991 it became the first-line molecular test for ID, and is amongst the most common reason for referral to UK Regional Genetics laboratories. However, as the clinical signs of the condition are quite non-specific, the detection rate is less than1%.

A major breakthrough came with the introduction of chromosomal microarray, which significantly improved detection rates thanks to its ability to detect much smaller chromosomal imbalances than karyotyping. Karyotyping can detect imbalances in the 3-5MB range, whereas in contrast most array platforms can detect copy number changes of around 10kb, enabling detection of most pathogenic imbalances.  Detection rates of 15-20% in patients with developmental delay or ID have been reported using this technology1 and hence microarray analysis is now the recommended first line test for these individuals. In addition, recurrent copy number variants (CNVs) detected by microarray have led to the identification of many new ID syndromes.

Given the number of genes associated with ID, analysis on any scale was an almost impossible undertaking without the development of improved technologies to manage the required throughput of sequencing. It has been the power of next generation sequencing (NGS) technologies which has rapidly driven improvements in ID diagnostics.

In one of the first large studies of almost 1,000 patients with ID, a targeted NGS based screening approach using a defined panel of 565 genes, identified a ‘likely pathogenic’ variant in an additional 11% of cases over and above that seen with microarrays alone2. Whole exome sequencing (WES) accelerated the identification of many genes associated with clinically defined forms of ID, and was hence an obvious approach to analysis of patients with less well defined, or non-syndromic, forms of ID. The first study to use WES was trio based, comparing exomes from the unaffected parents against that of their child with ID and identified de novo (new) variants in 6 of 10 families3. Further larger studies identified possible genetic causes in 13-35% of cases of severe ID.

The Deciphering Developmental Disorders (DDD) project has been a UK wide collaboration to facilitate translation of genomic sequencing technologies into the NHS, and to improve diagnosis in children with developmental disorders, 87% of whom had ID or developmental delay. Trio based WES of 1133 previously investigated, but undiagnosed, children achieved a diagnostic yield of 27%4. Over three quarters of these children had already had clinical microarray analysis performed plus other single genetic tests, so the introduction of WES at an early stage in the diagnostic odyssey would be predicted to increase diagnostic yields with reduced costs.

This month’s publication5 of 337 unselected individuals analysed using a combination of microarray, targeted NGS of 758 genes and WES has revealed a probable diagnosis in 58% of cases, confirming what others have seen in selected patients. In addition to the superior detection rates, exome sequencing also has the advantage of identification of novel genes. This week a further gene responsible for a new ID disorder, BCL11A, has been identified by the Wellcome Trust Sanger Institute. Many more ID genes remain to be identified over the next few years, but the importance of a genomic approach for diagnosis is unquestionable, and will provide answers for many families as well as opening up therapeutic options for some. 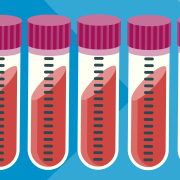 Liquid biopsy: What is it and why does it matter?