You are here: Home / Genomics in practice / Back to the future of ophthalmology: 5 predictions

We take a look back at a bold paper published in 1999, ‘Ophthalmology in the post-genomic era’ to see how accurate its predictions really were

The future is here! In November 1999, Graeme Black, Michael Boulton, Paul Bishop and David McLeod published a paper looking 20 years into the future of ophthalmology. We have now arrived at that future, writes Dr Siobhan Simpson.

While the article’s opening statement, “The year is 2019. Nature Genetics is no more…”, is not true (Nature Genetics is still a thriving journal), how much of what the authors predicted has happened? And what developments did they not foresee?

Correctly predicted: Cell culture (growing cells in the laboratory), animal models and human studies continue to be used to study the effects of genes. The authors also mentioned the role of organ culture – where tissue samples that retain structural context are kept alive in the laboratory.

Not foreseen: What the authors did not predict was the development of organoids. Organoids are small clusters of cells that grow and behave like mini organs. The first report of mature ocular organoids was in 2017. Since then, ocular organoids have been used to identify additional genes, investigate the effects of different versions of genes and identify potential gene therapies for eye diseases and disorders.

Prediction 2: The use of bioinformatics will be important

Correctly predicted: In 1999, bioinformatics was used to integrate biological and genetic information to answer biological problems. Since then, the field of bioinformatics has greatly expanded and is an important part of genomic research and medicine.

These days, generating raw sequence data from a whole genome can take less than a day. But interpreting it to return results to patients takes longer, and bioinformaticians are a crucial part of the analysis and interpretation team.

Mostly correctly predicted: The authors predicted that large amounts of functional genetic information – how much of each gene product is made – would become available; in particular, that chips would be produced that could array all the human genes. There are indeed large amounts of functional genetic information available now, and arrays can provide some of this, but RNA sequencing is increasingly used.

Not foreseen: RNA sequencing is not something that the authors predicted. This technology can sequence and quantify all the RNA in a sample, which shows how much of each gene is being made. RNA sequencing can even be used on single cells.

Prediction 4: Diseases will be better sub-classified

Predicted, but still in progress: Many diseases present in the same way, but can have different underlying causes, including the genetics at play. If such diseases could be better sub-classified based on their genetics, this could lead to more accurate prognoses, more specific treatments and better prediction of who is likely to develop disease.

The authors predicted that better sub-classification of common eye diseases, such as primary open-angle glaucoma (POAG), perhaps based upon different genetics, would improve accuracy and targeting of treatments. While some progress has been made in sub-classifying eye diseases, this remains an active area of research – including a specialist research group as part of the 100,000 Genomes Project.

Predicted, but still in progress: As with today, gene therapy was a hot topic in 1999. But, as the authors pointed out, there was little conclusive evidence that it had been successful in treating disease in 1999.

This remains an active area of research, but effective gene therapy treatments are becoming available, with one such treatment approved this year in the UK to treat an eye disorder. 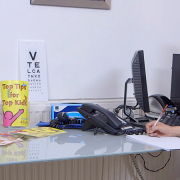