You are here: Home / Genomics in practice / Keeping genes in mind: genomics and mental illness

Despite the progress we’ve made in our knowledge of human illness and how best to treat it, there is still much we don’t yet know about the mind. Here, UCL Genetics Institute honorary professor and psychiatrist David Curtis explains the challenge of understanding mental illnesses like schizophrenia, and how recent advances in genomics could have a real impact on clinical practice.

The challenge of the mind

Throughout the history of psychiatry, researchers have tried but failed to find any physical basis for the strikingly abnormal experiences and behaviours of patients with severe mental illness.

There are no blood tests or brain scans that can help us understand the nature of mental illness. Diagnoses are based on patterns in the clinical presentation, such as mood changes, delusions or ritualistic checking, and medications are prescribed on an empirical basis: we know that they work (sometimes with a surprising level of effectiveness), but we don’t really know why.

Mental illnesses are especially difficult to research because invasive investigations of the brain are not possible in the way they are for other organs. Even when physiological differences can be measured, it is often impossible to distinguish whether these are causes or effects of mental illness.

It’s now believed that our genes could well play a part in our susceptibility to any given illness, and the effect of genetics on the risk of schizophrenia and bipolar disorder (manic depression) are well evidenced and substantial.

Genomic research offers the hope of better understanding the root causes of mental illness: by finding specific genes which are involved in these devastating illnesses, we might gain some understanding of the pathological processes leading to their development and ultimately develop better treatments.

Initial research attempts were unsuccessful, but the latest genomic technologies mean that we can finally point to some substantial progress.

The discovery with the most immediate clinical relevance relates to schizophrenia. Research has found that some patients with the condition have a chromosomal abnormality called a copy number variant (CNV) – where there is either an extra copy of part of the chromosome (a duplication) or a part that is missing completely (a deletion).

There are around 12 known locations on the chromosome where a CNV results in a substantially increased risk of schizophrenia – perhaps a thirty-fold or more increase above the background risk of 1%. If such a CNV is present in a person with schizophrenia, then it would be reasonable to say that the CNV had ‘caused’ the illness.

Typically, a CNV will impact several different genes and it has proved difficult to identify which of these are specifically responsible for increasing risk. Nevertheless, discovering that a patient carries a CNV has important implications:

The proportion of people with schizophrenia in which a CNV is found is small – around 2% – but since the identification of a CNV has important implications for them and their family, and since the test is simple and inexpensive, some psychiatrists argue that testing for CNVs should be routine for those with a new diagnosis.

It is known that when the function of certain genes is disrupted by variants in a person’s DNA, the risk of schizophrenia can rise. However, implicating individual genes has proved challenging, and the first to be identified, SETD1A, did not provide insights into how its disruption might lead to schizophrenia, as had been hoped.

The very latest research by an international collaboration called SCHEMA, which has analysed thousands of exomes, has identified a handful of genes where loss of function substantially affects schizophrenia risk – with some genes appearing to be linked to disease processes.

The clearest example relates to a particular receptor molecule for the neurotransmitter glutamate. It was already known that drugs blocking this receptor, as well as a syndrome called autoimmune encephalitis where antibodies attack the receptor, could cause symptoms that are similar to schizophrenia. Researchers have now demonstrated that variants that disrupt a gene coding for this receptor also increase schizophrenia risk. Thus, pharmacological, immune and genetic results all suggest that impaired functioning of this glutamate receptor can increase the risk of developing psychotic symptoms and other problems associated with schizophrenia.

These findings offer an opportunity to try to develop better drug treatments which might modify receptor functioning and lessen symptoms.

Where we are now

Several genes have been identified whose disruption can substantially increase schizophrenia risk and, in due course, this may also be achieved for bipolar disorder. However, the number of cases where a specific variant can be implicated is likely to remain very small, and there is no prospect of giving everybody a ‘genetic diagnosis’.

Nevertheless, this line of research – and wider access to genomic analysis – is now producing results with the potential to enhance our understanding of severe mental illness in ways that will have a real clinical impact.

David Curtis is an honorary professor at UCL Genetics Institute, UCL and at Centre of Psychiatry, Queen Mary University of London. Find out more about him on his webpage. 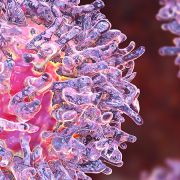