Following our insightful patient panel event on 6th March, we explore the importance of preparing for the highs, and lows, of genomic testing

On 6th March, the programme partnered with Progress Educational Trust to hold a panel event in Birmingham as part of our Genomics Conversation week of action. The event focused on the experiences of patients who have been through genomic testing, and the ways in which health professionals can best support them.

On the panel were Claudia Beard, whose son Trent has an undiagnosed condition that includes autism and epilepsy; Sabine Starr has dystonia – a rare neurological disorder that has affected several generations of her family; and Charles Stewart, a genomic scientist whose daughter has a type of epilepsy called West Syndrome and his son has periventricular leukomalacia, a form of brain damage; both children were born prematurely and have cerebral palsy. All three panellists are members of the 100,000 Genomes Project’s Participant Panel.

Here, in the first of two blogs covering key points from the event, we focus on their experience of being prepared for the pitfalls of testing.

“I wish I had known that we may never get an answer or an explanation as to why our son is the way he is. That was something that took my husband and me a long time to get our heads around.” – Claudia

Genomic testing has enormous potential, but not every patient will get a genetic diagnosis that explains their symptoms. According to Professor Mark Caulfield of Genomics England, only around 40% of 100,000 Genomes Project participants with intellectual disability, for example, are receiving a diagnosis currently – and the numbers vary in other fields.

60% of people must therefore come to terms with receiving a ‘no diagnosis’ result. This does not necessarily mean that there is no underlying genetic cause for their clinical presentation, but rather that no conclusive link can be made at present; when their genomic information has been sequenced and assessed against gene panels, developed to look for variants where there is evidence of links to disease, no link has been found.

As Sabine explains, this can cause confusion and disappointment among patients if improperly explained at the outset:

“My initial understanding was that the whole genome would be sequenced, and any mutations would be identified and that’s where the results would come from. Through being on the Participant Panel I now realise that at the moment only gene panels are being explored and that was a disappointment for me when I found that out.”

But, for patients who receive no diagnosis at this stage, there is hope that future analysis will reveal more. Mark Caulfield explained this in a recent interview with Jillian Hastings Ward, Chair of the Participant Panel:

“We are continually evolving [the] panels and now we’re looking outside the genes, in other parts of the genome, for variations that might cause disease. That’s the virtue of having your whole genome – we can go back with new knowledge to get new answers for our participants.”

“My advice to a patient getting their genome sequenced is that genomics isn’t the be-all and end-all. While it gives people a lot of hope that they’re going to get answers and find a cure, I think it’s important to focus on other positive things as well. That will differ from person to person, but for me it’s been about finding natural ways to improve my symptoms.” – Sabine

Getting a diagnosis may be the end of a diagnostic odyssey, but it can be the beginning of a new journey for many patients and their families, which according Dr Chris Patch – a nurse and genetic counsellor who acted as facilitator at the event – can be just as long and have just as many ups and downs.

Sometimes, a diagnosis will not result in a change in treatment. Life may be very much as before, or – where a very rare variant is found to be the cause of a patient’s condition – there may not be much further information available, leaving patients and their carers with new unanswered questions. This can be frustrating, and it is important to both prepare people for this possibility and offer appropriate support.

Dr Patch emphasised that ultimately the focus must be on getting patients the best and most appropriate ongoing care and thinking into the future for that individual, whether they have a diagnosis or not.

In next week’s article we’ll be looking at some of the other aspects of communication discussed at the event, including acknowledging the expertise of patients and families and the value of signposting to relevant information.

Polygenic risk scores: how useful are they?

All I want for Christmas is... a family history

2020 vision: genomic predictions for the year ahead 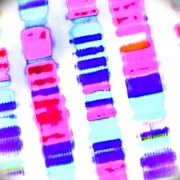 The rise of consumer genetic testing