Genome sequencing is increasingly being used to diagnose rare diseases in children. In the paediatric setting, research has shown that sequencing can improve the rate of diagnosis by around 40%, and this will likely increase as knowledge of the genome and its relation to health grows, writes Celine Lewis.

When seeking consent for a genomic test, it is good practice to speak with young people about genome sequencing and the benefits, risks and limitations of the technology, so that they can be actively involved in deciding whether to have the test.

There are currently no measures available that test young people’s knowledge about genome sequencing, however. As part of my HEE research fellowship, along with my co-authors, we developed ‘kids-KOGS’ (knowledge of genome sequencing) – a measure that can be used to assess young people’s understanding of this technology. It is aimed at 11 to 15-year-olds, as even though parents usually consent on their behalf, they are often involved in discussions about their healthcare.

How was the measure developed?

We developed a set of 10 true/false statements, which covered a range of different aspects about genome sequencing. These included what a genome is, what is involved in genomic sequencing, and the limitations and uncertainties of the technology.

The statements were developed in a number of ways, including speaking directly with young people aged 11-15 years to identify the questions they would want answered if they were considering having genomic sequencing. The wording of the 10 statements was also tested out with 83 school pupils to ensure they were written in a way that could be understood by that age group.

How was the measure tested?

The 10 statements were administered in person to 554 pupils across six schools, four secondary schools and two primary schools. For each statement, responders were asked to indicate whether it was ‘true’, ‘false’ or ‘don’t know’.

Psychometric analysis of the responses was then undertaken, to look at the suitability of the statements and to make sure they were measuring knowledge effectively. We also looked at the proportion of correct responses to the 10 statements.

What were the results?

The statement that was most frequently answered correctly was: “Our DNA is inside our cells” (true, 83.1% correct), followed by “Our DNA doesn’t have an effect on how our body works” (false, 69.2% correct).

The statements that were least often answered correctly were: “Around 1% of our genome is the same as other people’s” (false, 14.1% correct), and “Our complete set of DNA is called our genome” (true, 21.9% correct).

Our measure has now been published in the journal Clinical Genetics. It is freely available to use and can be translated into other languages.

We hope that the measure will prove to be a useful resource for clinicians wanting to assess young people’s knowledge and understanding of genome sequencing. This could help clinicians identify those young people that might have misunderstandings about the test and who may therefore require more in-depth information or counselling. 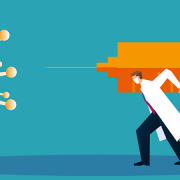 How genomics is changing vaccines