Rapid advances in technology and understanding mean that genomic testing is becoming much more integral to the practice of all neurologists. Given such advances, and the introduction of the national Genomic Medicine Service in England, there is a requirement to consider where genomics may benefit our patients and be familiar with the testing process and the implications for patients and families.

In this film, Professor Huw Morris of UCL, UCLH and Royal Free Hospital outlines the ways in which genomics is increasingly being applied in the clinic, and some of the things that all neurologists should be aware of. 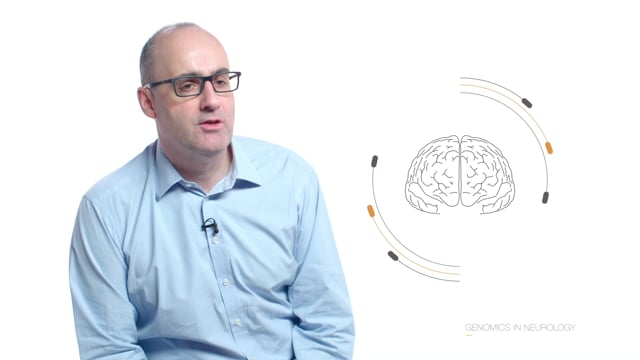 What do I need to know?

Why is genomics important in neurology?

Genomics refers to the study of all of an individual’s DNA. Our knowledge in this area is advancing rapidly thanks to new genomic technologies.

Understanding the control of gene expression in the brain is central to understanding normal brain function, and increasingly neurological disease.

Genomic testing and the information it generates underpin diagnosis, treatment and management decisions for some neurological diseases, and  in the future this is will become the case for common conditions as well as well-known neurogenetic diseases.

The introduction of the NHS Genomic Medicine Service in England means all neurologists will have access to genomic testing where they may not have done previously; thus, understanding all the instances where this could benefit our patients is important.

As genomic technology is enabling progress in our understanding of the aetiology of disease, it is enabling the development of new targeted therapies. Rapid progress in clinical trials and drug development are expected over the next few years. There are now trails underway for Parkinson’s disease and motor neurone disease, for example, targeting specific genes such as LRRK2 and C9orf72 (see ‘Genomics in Practice’ examples below).

How is genomics used in neurology?

Genomic testing is particularly useful in the diagnosis of familial and early-onset neurodegenerative diseases, for example ataxia, hereditary spastic paraparesis and some forms of dementia and Parkinson’s.

Prior to genomic technologies, testing was done gene by gene. For a condition where there may, for example, be 10 possible genetic causes, this is a time-consuming process which takes its toll on patients and families. Genomic testing enables us to test many genes concurrently and thus speeds up diagnosis in these instances.

Genomic test results can impact whole families. If one person in a family is found to have pathogenic variants, other family members could, too. If such variants are found early, it can enable better clinical management for the whole family and enable individuals to consider their options for the future.   For example, identification of the Huntington’s gene mutation in a family with Huntington disease enables the counselling of other family members for risk-management including possible  predictive testing and referral to relevant clinical trials.

The identification of the genetic cause(s) of a disease makes it easier to develop targeted therapies. For example:

The widespread availability and relative accessibility of genomic testing will result in more trials, more patients being eligible for and recruited to trials, and, as a result, more rapid progress in the area of targeted treatments.

We know that some people are at higher risk of certain conditions due to a combination of multiple genetic variants – for example Parkinson’s Disease, for which we know of around 90 associated areas of the genome. Estimating this risk to an individual using polygenic risk scores is complex, but it is a focus for research. Genomic technologies make rapid advances in this area probable, but it is likely that clinical geneticists will specialise in this area.

How can I play my part?

Now that we have access to genomic testing through the NHS Genomic Medicine Service, it’s important to understand:

It will also be important to stay abreast of developments in the Genomic Medicine Service, which is a new service that will rapidly evolve.

More and more clinical trials are opening up for patients, so these should also be considered.

Now that testing is opening up and we will be offering it directly to our patients more and more, Professor Morris recommends being aware of the following key counselling considerations. It’s important to be certain that the patient and their family, if they’re present, understand their options and the potential implications of genomic tests.

As Professor Morris describes in our film, the best example of gene-directed therapy in neurology currently is the use of Nusinersin for children with spinal muscular atrophy (SMA).

It is hoped that many more treatments, based on similar mechanisms, will be developed now that wider access to genomic technology and genomic data is possible.

Genomics in practice: Trial to clinic

In some cases where gene-directed therapies are not available, the wider availability of genomic testing means that patients could be eligible for clinical trials.

For updates on clinical trails, see the Alzoforum website.

Having a family history in a common condition, such as heart disease or diabetes, can be an important risk factor. For rare, inherited conditions, a genetic family tree can help to inform testing, surveillance, treatment and management strategies.

Equip yourself with the knowledge and skills to construct a genetic pedigree.

Watch a video
Order a tool
Download a document

Activity: Recognising the clinical clues of a genetic condition

Watch a video
View a guide